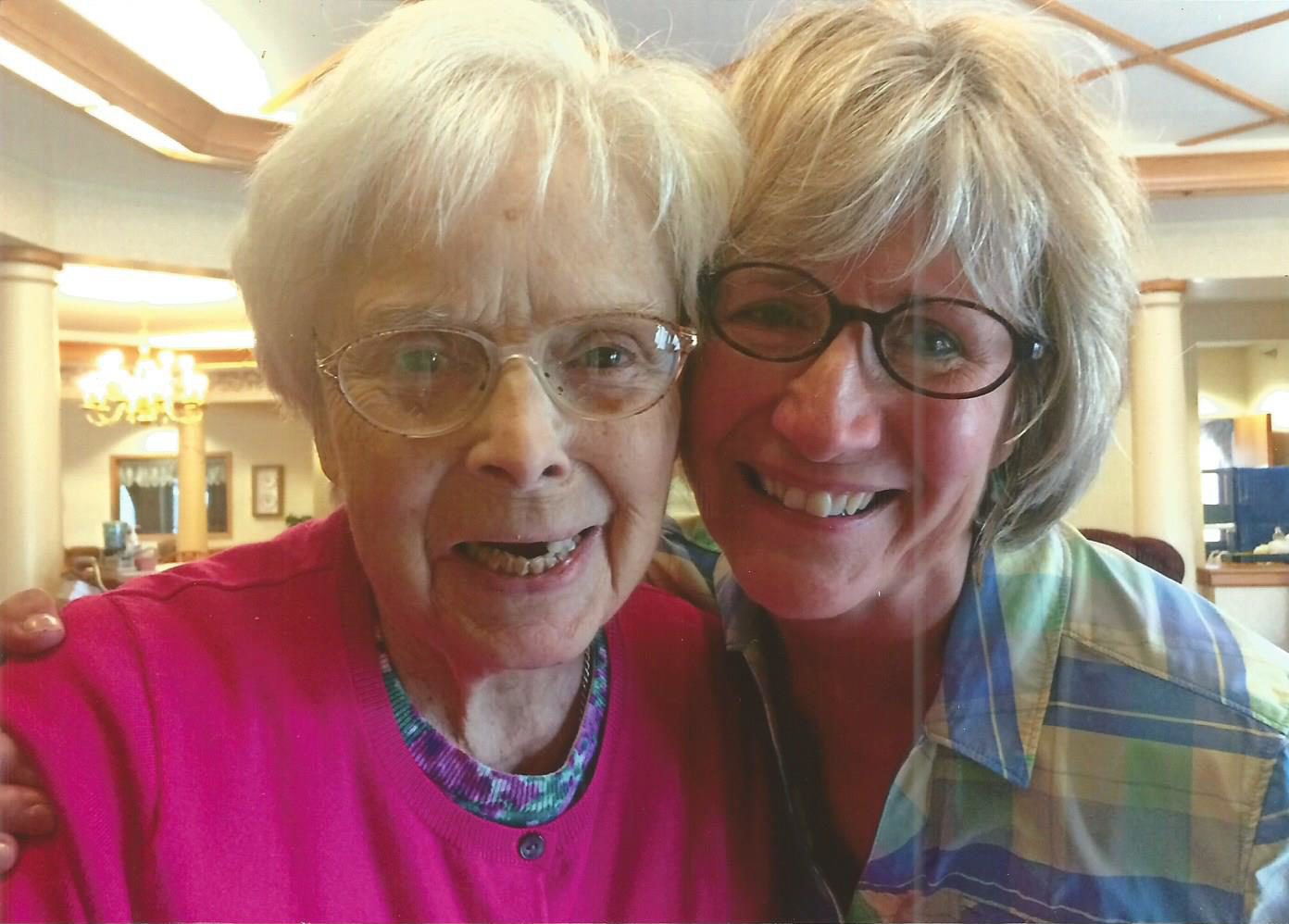 Unique individuals enter our life, some for a moment, some longer. Some relationships short lived, others cause a sea change. A few years back one such person entered my life, no plan, no expectations. I was only to give overall insight, support, and care. Then she grabbed my heart and squeezed it. Everything changed. She was Thelma and I, Louise. The Irish Mafia wasn’t as formidable.

Her death on April 6 beautiful, yet difficult. Beautiful because as she took her leave she completed her earthly tasks. She took care of business. And I kept a promise to her, I was by her side. She never wanted me to leave her. I didn’t. Spoke her eulogy at both funeral Masses, one at Saint Joseph the Worker, the other at her home parish, Saint Theresa in New Jersey. And again, as promised, I was with her to the end, as her spirit vessel returned to the earth.  Difficult. I miss her every day.  I find it difficult to write about her. The loss-still too raw.

Initially. we had no idea the length of the journey. Multiple times she surprised. Once as I fed her she almost aspirated. That moment too-very difficult.  A short time before our meeting, she was diagnosed with Alzheimer’s. Yet, one of our first experiences she shared her deepest pain. In my profession we call it a 5th Step, in my church life-the Sacrament of Reconciliation. The experience was profound. Never let anyone tell you people with Alzheimer are not there. Written in two of my favorite books- Carol’s Journey with Alzheimer’s and Still Alice, Dorothy was still Dorothy. She had bad days. Although we didn’t. Her bad days were often ones where I just held her hand, or her face, and loved her.

She missed her first love. She talked about him as if he were in the next room. She never stopped loving him. They both married others. He came back to her mind as clear as the day he left for the service, all those years ago. And like some of her generation, her life was not easy. His love for her and vice versa was a light that never diminished. The mother of nine married a man who ultimately spent most of his job, and time internationally leaving Dorothy to virtually raise the brood by herself.

It was what I always called her. It made her smile. It is the name she was given at birth. Sometimes I called her Jesus because she did things I have known only Jesus to do. Like resurrect.

Our daughters brought us together. The moment we met it was instant connection.  She became my mother, mentor, best friend WITH Alzheimer’s. I oftened wondered if our friendship had been different pre Alhzeheimers. I think not. I believe not. She often told me in those graced moments of clarity, I was her best friend forever and ever. I loved her with my whole heart and soul. And she knew it. Every minute together was precious.  We laughed hard and long. She even got us even got us kicked out of bingo and a piano concert. How? Laughter. Pure and simple laughter.  Her laughter permeated everything. We spent hours laughing. We had a blast.

And we cried together. Three things brought tears to Dorothy’s eyes, three things were her core.

The first was Ireland- HER Irish eyes were always smiling. Her Irish roots were deep and they came with a quick Irish wit and Irish emotions. Once she told me the only thing she ever wanted was to see Ireland. It never happened.  So I told her, I was taking her there. She cried.  I found every DVD on Ireland I could find. By virtue of technology we would explore Ireland on DVD’s and through Irish concerts. We sang Irish songs, celebrated Saint Patrick’s Day for a month and as any good Irish woman is known to do, her response, she cried. I told her when I go to Ireland she is going with me. She squealed with delight. She knew I would take her. I am. She LOVED being Irish.

Second, was her faith.  As her precious priest and adopted son, Father Stan stated, she was a devout Catholic that had two rules for any child finding themselves at “Dorothy’s House’.  1-They had to let their parents know where they were and 2-They had to attend Mass. Some of those same boys, now graying men, attended her funeral Mass and confirmed the story.

As philosopher and theologian Irenaeus said, “The Glory of God is the human person fully alive.” Dorothy Mary Healey, right to the end of her life was fully human, fully alive, in her knowledge that God lived in her and through her. She loved God. She loved the Catholic Church. Her faith gave her great joy. In times of pain and disappointment, Dorothy’s faith sustained her.

The third thing that always brought tears to her eyes was her family. Dorothy raised those nine children virtually as a single parent. It is a lonely job; yet again, her faith sustained her. She loved her babies. Her children.  Unconditionally. When her moments of motherhood became difficult and disappointment reigned, what did she do? She just opened her door to more children, including two of her grandchildren bringing them over the threshold of her home.

Her last earthly bed provided a respite of love to the staff at Golden Valley Sunrise. They received it from a woman who never stopped giving it.  As Isaiah wrote in scripture, “All nations were represented on that bed.” They were all her children. She never stopped teaching when you walked across the threshold of Dorothy Mary Healey’s life.  Irish hospitality happened to the very last day of her life. The loving multitudes pass over her threshold to say goodbye was evidence of this generous heart.

As mothers we shared many similarities. One was guilt. She had her guilt as a mother.  She once told me she thought sometimes she was too controlling. I told her “Aren’t we all?”  For her though, most of her control had to do with survival. The reality is Dorothy Mary Healey was the best mother in the world. As Mary Poppins would say, “Practically perfect in every way.” How does a mother really count the ways she loves those she created? She didn’t. She just loved.

We moved Dorothy three times before finding a place that did not abuse her. Yes, abuse her. This is more common than most people realize. More than once I wanted to place her on my shoulders and take her home with me.  Steps prohibited it. Love did not. So we placed a camera in her room the last two facilities. It proved what we feared, in the second facility like the first, she was being abuse. The third facility camera proved they weren’t. The camera brought a modicum of serenity.

The values she lived are captured in her favorite prayer, Prayer of Saint Francis.  I often sang it to her when she was anxious.

Lord, make me an instrument of your peace.

Where there is hatred, let me sow love;

Where there is injury, pardon;

Where there is doubt, faith;

Where there is despair, hope;

Where there is darkness, light;

And where there is sadness, joy.

O Divine Master, grant that I may not so much seek

To be consoled as to console;

To be understood as to understand;

To be loved as to love.

For it is in giving that we receive;

It is in pardoning that we are pardoned;

And it is in dying that we are born to eternal life. Amen

On the eve of my Ireland trip, I finally could write about my Irish Angel.  I am thinking of  the other promise I made.   Dorothy Mary Healy’s spirit will be with me in her home land in County Mayo and County Cork.  I will sing Irish songs at the concert of our favorite Irish singer and eat Irish food. I will drink in the green of Ireland and know while I do it those smiling Irish eyes will be with me. I often whispered in her ear, “All will be well, Angel.” And it is, Dorothy Mary Healey. My Sweet Irish Angel.  All is well. Our Irish Angel taught us to believe.  I do.